Little Gidding Church interior bears witness to its vibrant past.

To explore:
1. Simply click on the markers in the picture for a brief explanation.
2. Click on the link to be taken down the page for more information. 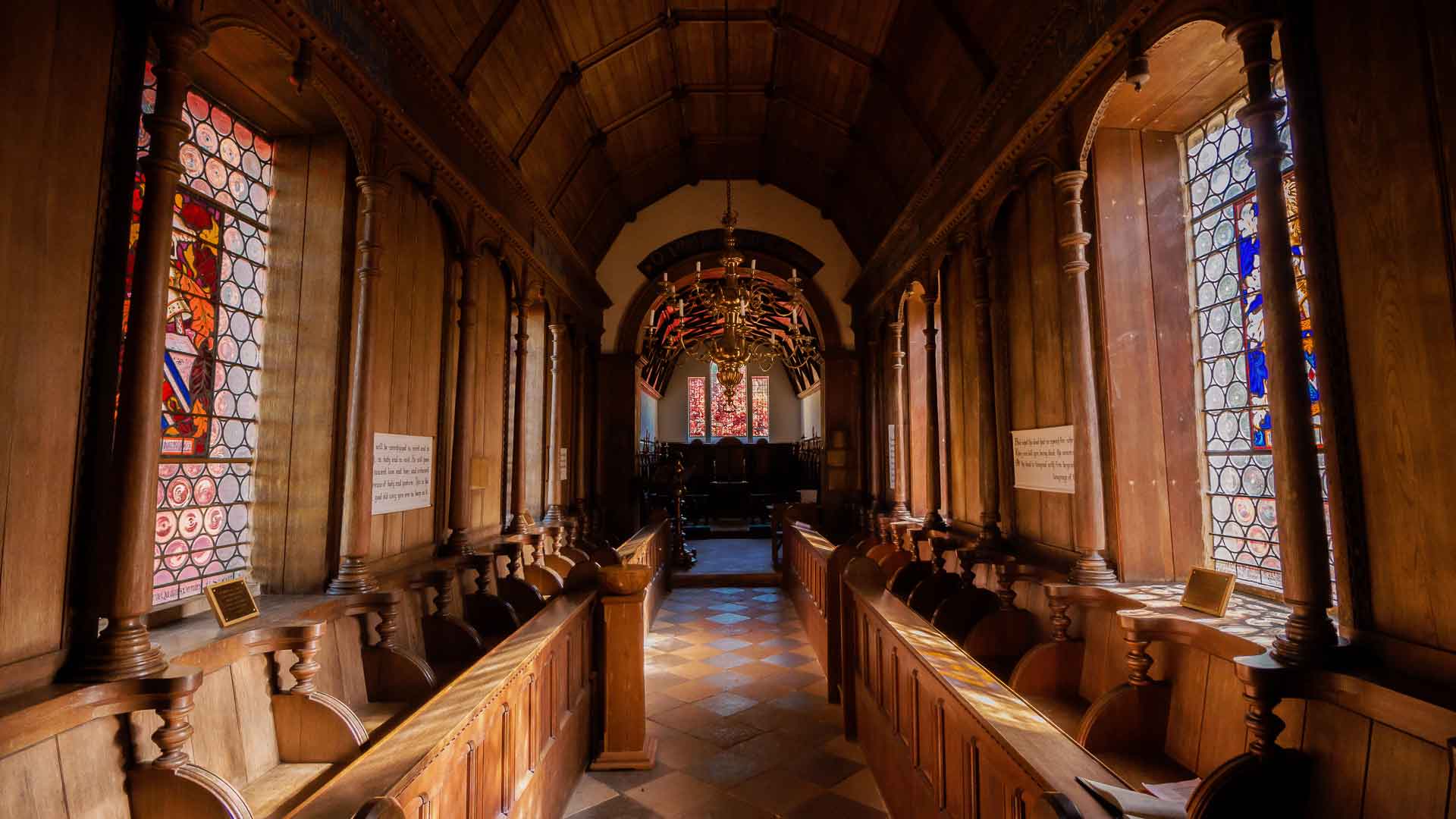 The window shows the arms of the Ferrar family.

At the base of the glass is written:
Insignia Nicolas Ferrar Dni manerii de Gidding parva qui obiit 4 Decembris AS 1637
(The arms of Nicholas Ferrar, Lord of the Manor of Little Gidding, who died 4 December in the Year of the Saviour 1637)

Over the window arch is written:
‘Ecce vere Israelite cui dolus non est’ St John Ch 1.v.47
(And Jesus saw Nathaniel coming to him, and saith of him, Behold an Israelite indeed, in whom is no guile!)

This window was restored and re-dedicated with the help of a generous donation from the T.S. Eliot Society of America 2007.

More about Nicholas Ferrar | Back to main picture

Over the window arch:
‘Non avarus sed hospitalis’ Titus Ch1.v.7&8
(For a Bishop must be blameless, as the steward of God; not selfwilled, not soon angry, not given to wine, no striker, not given to filthy lucre;
But a lover of hospitality, a lover of good men, sober, just, holy, temperate;)

[Bishop Williams had been a great supporter of Nicholas Ferrar and his family Community: Little Gidding then lay within the Diocese of Lincoln.]

The window shows the arms of Charles I

At the base:
Caroli I qui latitabat apud I manos 2 Mai AS 1646
(King Charles who took refuge in this Manor 2 May in the Year of the Saviour 1646)

Over the window arch:
‘Ut si quis perdicem in montibus’ I Samuel Ch26.v.20
(Now, therefore, let not my blood fall to the earth before the face of the Lord; for the King of Israel is come to seek out a flea, as when one doth hunt a partridge on the mountains.)

[This refers to King Charles being hunted by Cromwell’s army after his defeat at Naseby, 1646, when he sought refuge at Little Gidding]

The window shows the arms of William Hopkinson

Over the window arch:
‘Diligo habiteculum Dominus tua’ Ps26 v.8
(Lord, I have loved the habitation of thy house, and the place where thine honour dwelleth)

More about William Hopkinson | Back to main picture

Oratory of the Good Shepherd – was founded by a group of Cambridge College Chaplains, “Eric Milner-White had been studying the life of Nicholas Ferrar of Little Gidding, who may be regarded as the precursor of the modern religious life of the Church of England. In December, 1913, the brethren went for some ten days of the common life at the farm at Little Gidding, and held their services in Nicholas Ferrar’s little church. The rudiments of a constitution were drawn up at this time, which came to be known among the early brethren as ‘the Provisions of Little Gidding.’ The Oratory has always had an especial devotion to Nicholas Ferrar, commemorates him annually on December 4th, the day of his death, and honours him as patron of the Society.”
See the Oratory website – www.ogs.net

Embroidery
Lines from ‘Little Gidding’ by T.S. Eliot, embroidered by Veronica Gray, a member of the Community of Christ the Sower.

Embroidery
Words attributed to Nicholas Ferrar on his death-bed, embroidered by Veronica Gray.

More about T.S.Eliot | Back to main picture

6. ON THE NORTH AND SOUTH WALLS OF THE CHANCEL ARCH

Here lieth the body of
John Farrar Esqr Lord of
This mannour who departed
This life ye 28th Septembr 1657
on the reverse of the plate:
Flee from evil
And
Doe ye thinge yt is good
And
Dwell for evermore
Ps 37:2

Here lyeth the body of Ann ye wife of John Ferrar Esq who departed this life the 8th March 1702. She was the daughter of Thos. Brook.

Here also sleepeth Susana, wife to John Collet Esq by whom she had issue 8 sonnes & 8 daughters. She was ye only daughter of Mr Nicholas Farrar of London Merchant & sister to John Farrer Esq late Ld of this manor who died ye 9th Oct 1657 aged 76 years.

Here sleepeth Eleanor Goddard daughter of George Long of London Merchant and relict of James Goddard of Marston in Wilts, Gent, who died April the 20th 1717.

Here lyeth the body of John Ferrar Esq Lord of this Manor who departed this life Febr the 23 1719 aged 89.

(Son of John Ferrar, nephew of Nicholas the younger).

7. OVER THE CHANCEL ARCH AND THE CHANDELIER

Over the chancel arch this inscription
‘O pray for the peace of Jerusalem’
(From Psalm 122, v.6: referring to the early relationship of Little Gidding church to the Knights Templar and Hospitaller)

It has been suggested that William Hopkinson bought the chandelier from Uppingham Parish Church at the time of its renovation in early 1850s. The description matches, and William Hopkinson lived nearby in Wansford, his nephew was at Uppingham School, but no records have been found to confirm the transaction.

More about William Hopkinson | Back to main picture

8. ON THE SOUTH WALL OF THE NAVE

Over the West door:
‘How amiable are thy tabernacles, O Lord of Hosts!’
(From Psalm 84, v1)

Window
East window in plain glass in the Venetian style, designed by the Diocescan architect Julian Limintani and put in place in 1990 to replace the large stained glass Crucifixion East Window installed by William Hopkinson. This latter proved to be too large for the wall, so was sold to Peterborough High School. The installation of the new window was made possible by the generous bequest of Mrs Billye M Upchurch Purdom of Lewisburg, TN, U.S.A., who died in 1989. The Upchurch family had lived in the Brington and Giddings area before leaving for the American colony in the mid 17th century.
On the East wall
Brass plates thought to have been installed by Nicholas Ferrar, with the essential texts: the Creed, the Ten Commandments and the Lord’s Prayer.
(Post-reformation English churches were fitted with words rather than images)

Lady Margaret Proby’s cousin, Mr Hope Bagenal, noted in a memorandum of 27th July 1933 “I was struck by the paramount requirement of sufficient daylight in the church. It was a bright and sunny afternoon yet there was insufficient daylight for the reading of the lessons…Mr Jones took his book and…turned it towards the west door. This lack of light was due to the … trees screening the large east window. This could be remedied best by cutting down a tree or two and at the same time replacing the very ugly existing stained glass window by a more suitable design.”

The window was installed by William Hopkinson during his 1850s restoration, and there are many who still regret its departure from Little Gidding church. It is now the focal point of the chapel at Peterborough High School, where it is greatly appreciated.

The unique brass font bowl is thought to have been locally made (from a poor alloy) in the Ferrar’s time, and has deteriorated over the centuries. It was repaired and stabilised by the Metallurgy department of English Heritage in 1994. The cover is in the form of a crown, with fleurs de lys and trefoils standing around the edge. The stem is thought to be Flemish, 17th century, and with the supporting fire dogs make up the stand for the font-bowl. The whole structure is now under glass in the neighbouring Ferrar House.